OW/EAD Operable Unit (OU) includes six subareas: Old Works Golf Course, Industrial Area, Red Sands, East Anaconda Yards, Drag Strip, Mill Creek Addition, and Aspen Hills. To date, construction has been completed in five of the six subareas. The primary source of remedial concern for the OW/EAD Operable Unit was the large volumes of milling and smelting wastes, smelter fallout, and other debris originating from the smelter operations. Land use within the Operable Unit is mixed, including both recreational and industrial. 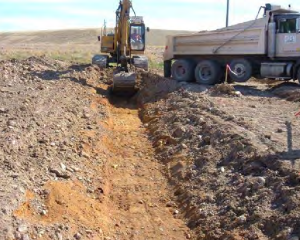 Given the Operable Unit’s potential to promote economic development within Anaconda-Deer Lodge County, in 1992, the first major institutional control at a Montana Superfund site was completed – the Development Permit System (DPS). The 1992 DPS established a master land use plan for the first time in Anaconda-Deer Lodge County. The development guidelines outlined in the Development Permit System ensure the current and future appropriate use of reclaimed lands in the County; thus, preventing damage to completed remedial actions and ensuring the protection of humans, wildlife, and the environment.

Further information regarding the six subareas of the OW/EAD OU follow.

In 1994, the EPA issued a Record of Decision (ROD) enabling the development of a golf course within the OW/EAD OU. The Golf Course subarea encompassed approximately 250 acres of tailings and contaminated soils. Remedial action within this subarea included the removal of over 600,000 cubic yards of waste materials and soil capping to ensure the area was safe for human recreational use. An 18 inch soil cover was placed over 2 inches of lime rock to cap the subarea. Additionally, an underground piping system was installed to prevent water leaching into the soil.

Remediation also included the construction of the Old Work’s Historic Trail, which follows the northern edge of the golf course. Some remains of the smelting operation, such as brick walls and flues were left in place along this trail to preserve the history and culture of Anaconda-Deer Lodge County. After the completion of all remedial actions in 1996, the property for the Jack Nicklaus signature golf course was transferred from Atlantic Richfield Company to Anaconda-Deer Lodge County via a Conveyance Document and a Prospective Purchaser Agreement in order to provide legal protection to the County from Superfund Law.

Rated “Montana’s #1 Golf Course” by Golf Week Magazine, the Old Works Golf Course has and continues to be enjoyed by both local and visiting golfers of all skill levels. The 18-hole, par-72 public course sports impressive vistas of historic Anaconda and the Pintlers mountain range, as well as remnants of Anaconda’s smelting history.

This subarea includes the Anaconda Industrial Park and the former Arbiter Plant complex, a copper refining facility that operated from 1974 to 1977. The Arbiter Plant produced small amounts of ammonia and heavy metal contaminated wastes, which were contained in the Anaconda Ponds (see ARWW&S OU, RDU 4) as well as several concrete pits at the site. Remediation of the Arbiter Plan complex was completed in 1994.

Remedial action in the rest of the Industrial Area subarea began in 2003 and included the removal, cover, and re-vegetation of remaining waste materials and contaminated soils. Remedial action in the Industrial Park was completed in 2009. The successful remediation of the Anaconda Industrial Park saw the development and relocation of numerous businesses and organizations, such as Jordan Contracting and Pintler Pets. The local Development Permit System (DPS) outlines best practices for disturbing protective covers. This document ensures the continued protection of humans, wildlife, and the environment as new development occurs in the Anaconda Smelter NPL site.

Adjacent to the Old Works golf course, the Red Sands received its name from the crimson jig tailings and slag generated from the Lower Works smelter. Due to the risk of contaminants in the subarea being released into Warm Springs Creek, a Time Critical Removal Action was initiated by the EPA for the Red Sands. In 1992, the Red Sands were stabilized, levees repaired, and fencing installed. Further remedial action was taken in 1998, including the construction of a soil cover and drainage/storm water controls. Soil capping in the area was completed in 2011.

In order to preserve the history of Anaconda’s smelting legacy, portions of the Red Sands were strategically preserved so as to ensure the safety of humans, wildlife, and the environment while celebrating the Anaconda’s past. Residents and visitors enjoy views of the Red Sands along the Old Works Historic Trail.

Adjacent to the eastern entrance of the Anaconda community, the East Anaconda Yards subarea includes approximately 100 acres of the Smelter Hill facility and Benny Goodman Park, a County owned Public Park. Remedial action for the subarea, which was completed in 1998, included installation of drainage controls and placement of a permanent protective covers. However, during redevelopment activities in 2004, additional hazardous waste materials and contaminates of concern were discovered. As a result, 40,000 to 50,000 cubic yards of waste materials were excavated and disposed of at an off-site hazardous waste facility. Beryllium excavated from the subarea was taken to the Aspen Hills Repository on Smelter Hill. An engineered soil cover was placed over all excavated areas. The local Development Permit System (DPS), created in 1992 and revised in 2015, outlines best practices for new development within the Anaconda Smelter NPL site, including soil excavation and disturbance of protective covers. This document ensures the continued protection of humans, wildlife, and the environment as new development occurs in the Anaconda Smelter NPL site.

Owned by a local drag racing organization, this subarea encompasses approximately 200 acres within the Old Works/East Anaconda Development (OW/EAD) Operable Unit (OU). Elevated surface soil levels of arsenic, copper, and zinc – due to stack emissions from the smelting operations of the Lower and Upper Works – were found in the subarea. Initial remedial actions included deep tilling, liming, and installation of drainage controls. These actions were completed in 1999. However, re-vegetation attempts were unsuccessful for approximately 125 acres of the Drag Strip subarea. As a result, in 2007, a six inch protective cover was created to ensure the protection of humans, wildlife, and the environment. This completed remedial action within the area.

A portion of the Smelter Hill Railroad Loop runs through this residential subdivision, located southeast of Anaconda and adjacent to the Mill Creek Addition subarea. Remedial action took place over a 2 ½ year period, beginning in 1996. Remedial action included the removal of contaminated ballast and ties from the Smelter Hill Railroad Loop, construction of drainage ditches, and grading/sloping of embankments. Waste materials were disposed of in the Aspen Hills repository, which was later limed and capped with a permanent soil cover. Remedial action within the Aspen Hill subarea was successfully completed in 1998.