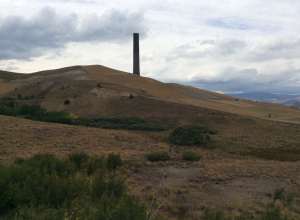 The last standing structure of the ARWC.

Encompassing 1,367 acres southeast of the city of Anaconda, RDU 14 – Smelter Hill Facility is the location where the majority of the smelting and processing activities took place between 1902 and 1980. The area was considered its own Operable Unit (OU) until the establishment of the ARWWS OU in the 90’s.

The Anaconda Reduction Works Complex – including the stack area, main flue, concentrator, and various industrial facilities – is located within the Smelter Hill Facility. After the closure of the smelting operations in Anaconda, the Anaconda Reduction Works were completely demolished, save for a single 585 foot brick smoke stack, an equipment garage and two guard shacks; structures that still stand today due to their historical value.

The Flue Dust Repository is one of the five repositories located within RDU 14. This 11.6 acre repository contains approximately 650,000 tons of flue dust, a by-product of copper smelting operations. Prior to construction of the repository, these large volumes of flue dust were stockpiled throughout RDU 14. In October of 1992, flue dust materials from these piles as well as that in the main flue were removed and treated. After all materials were placed in the Flue Dust Repository a cover soil and a vegetative cover were constructed over the repository.

The view from the top of smelter hill.

The Arbiter Plant, a hydro-metallurgical copper refining facility, was developed in the 1970’s to produce copper cathodes from copper sulfide concentrate produced at the Weed Concentrator in Butte. Located a half mile north of the Main Slag Pile (outside the boundaries of RDU 14), the Arbiter Plant was in operation from 1974 to 1977. In the early 1990’s waste materials stored in the Arbiter Plant were relocated to a 6.1 acre repository constructed within the Smelter Hill WMA. A cover soil and vegetative cover were installed over this repository, called the re-worked Arbiter Repository. The repository and its cover soil were evaluated throughout the 2000’s and by 2009 seeded perennial species had developed into a good and acceptable standing.

Approximately one acre in size, the original Beryllium Repository is located within the Smelter Hill WMA. The beryllium flake metal plant and beryllium oxide plant were in operation on Smelter Hill between 1964 and 1968. Wastes from these plants were disposed of in two locations: 1) beryllium waste were drummed and placed within the Opportunity Ponds; and 2) building debris from the demolished plant facilities were disposed of in a concrete bunker within the Weather Hill area. These materials were later excavated and consolidated in the Beryllium Repository. A final cover was constructed and seeded in Autumn of 1994.

The Aspen Hills Repository contains the excavated ballast materials from the Aspen Hills railroad loop, materials which contained concentrations of arsenic greater than 1,000 ppm (parts per million). After the completion of remedial action in the Aspen Hill railroad loop track area, which took place between 1995 and 1997, waste materials were placed in the 1.8 acre repository within the Smelter Hill WMA and RDU 14. The repository was capped with lime rock, an 18 inches of cover soil, and finally seeded.

Since the construction of these five repositories, evaluation of cap vegetation has taken place. The Original Beryllium Repository was first evaluated in 2000, while the New Beryllium Repository has been monitored since 2006. Performance evaluations took place from 2009 to 2011 for all five repositories. It was determined that all performance standards continued to be met. Remedial action regarding the repositories within the Smelter Hill WMA was completed in 2011. The Smelter Hill WMA and these repositories are not, however, the only area within RDU 14 where remediation was deemed impracticable.

Feasibility studies identified two regions of shallow bedrock aquifer, an estimated 11,000 acres in total, in which restoration of ground water to levels compliant with the Montana Groundwater Quality Standards was considered impracticable. As a result, in the 1998 Record of Decision, the EPA established the Smelter Hill Technical Impracticability (TI) Zone and Stucky Ridge TI Zone. A TI Zone is an area in which the EPA has determined that remediation to levels compliant with established standards is not practically feasible.

Remedial concerns within RDU 14 include high levels of soil contamination resulting from the operations of the Anaconda Reduction Works Complex. Specific concerns include preventing direct human/wildlife contact with arsenic, as well as minimizing the transport of contaminates to ground and surface water and adjacent lands. Preserving the 41 identified historical features that exist in RDU 14 was also a key component of Remedial Designs.

Remedial action within RDU 14 will include providing a permanent engineered/vegetative cover over contaminated soils and materials (approximately 1,238 acres), erosion controls (including both wind and storm water), and the reduction of surface contaminate levels compliant with the existing and anticipated future use of lands within RDU 14.