Extending from the East Anaconda Yards to Fairmont Road, RDU 5 – Railroad/Blue Lagoon includes sections of the Rarus Railway line and three sediment detention ponds, known as the Blue Lagoons. These ponds are designed to detain stormwater runoff for a minimum time to allow contaminates of concern to settle. RDU 5 also includes approximately 720 lineal feet of the Yellow Ditch (see RDU 9 – Fluvial Tailings) as well as an historical flume.

Three small surface water ponding areas are what are known as the Blue Lagoons. Though the water in these ponds is actually clear, the Blue Lagoons display a range of colors from greenish blue to greenish brown due to copper precipitates deposited in the bottom of the detention pond. The Blue Lagoon is located at the intersection of the railroad grade and the south fork of Willow Creek, and the Son of Blue Lagoon is roughly 0.75 miles further south. The Mill Creek Flood Irrigation Area is located along the active railroad line just west of the Willow Creek trestle. 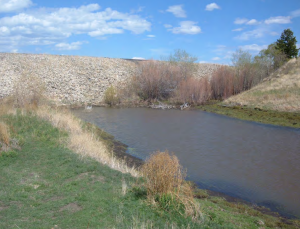 Numerous historic features were present within RDU 5 and considered in remedial designs. Though the entirety of the RDU 5 east boundary lies within the Butte-Anaconda and Pacific (B.A.&P.) Railway Historic District, no potentially historic features are present within the site boundary. Incorporated in 1892 by Marcus Daly and a group of investors, the B.A.&P. Railroad was used to transport ore and concentrates from the Butte mines to Anaconda from the mid-1890s until smelting operations were closed in 1980. Five years later, RARUS Railway was formed to operate the line, which remains active.

In addition to the historic railway, a cemetery is located south of the RDU 5 Blue Lagoon Site. The historic cemetery was not disturbed during remediation. The section of Yellow Ditch, which transported water from silver Bow Creek to the Opportunity Ponds, addressed under RDU 5 contained a deteriorated wooden flume. This flume was documented by the County Historic Preservation Officer prior to its removal.

Remedial designs focused upon minimizing human and wildlife exposure to contaminants as well as mitigating contaminate transfer to adjacent lands or waters. Remedial action within RDU 5 Blue Lagoon began in September of 2012 with the removal of 682.5 lineal feet of existing railroad track. Railroad embankments were then removed and reconstructed using clean materials obtained from an on-site borrow area previously developed. A concrete culvert was included in embankment design. After replacing the railroad track, the railroad was reactivated and utilized to haul waste materials from RDU 5 to the Opportunity Ponds (see RDU 8 – Opportunity Ponds) to be consolidated. Remedial action also included the removal of Yellow Ditch flume. Final remedial action, which concluded in June of 2013, included re-vegetation and installation of railroad right-of-way fencing.