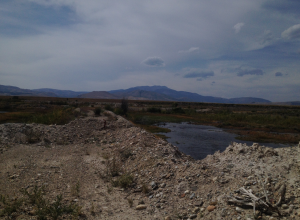 The formation of wetlands due to RA makes RDU 8 a favored area for wildlife such as elk, antelope, and sandhill cranes.

The Opportunity Pond is considered in six subareas, including the Triangle Waste Area, North Waste-Left-in-Place, A-Cells, B-Cells, C-Cells, and D-Cells. Remedial action has been completed in the following subareas: Triangle Waste Area (400 acres), North Waste-Left-in-Place (115 acres), A-Cells (325 acres). Portions of the B-Cells and C-Cells have also been remediated. Remedial action within the Opportunity Pond includes the stabilization of contaminates and installing a permanent vegetative cover.

A beryllium flake metal pilot plant and beryllium oxide plant operated within the Anaconda Smelter complex between 1954 and 1968. After the plant closed in 1968, wastes and contaminated materials were placed in drums and buried in a remote corner of the Opportunity Ponds. In 1992, these drums were excavated from the Opportunity Ponds and transferred into specially designed storage containers. These containers were then buried in a repository on Smelter Hill, which was specially designed to safely contain such waste materials.

Remedial action within RDU 8 has also included dust mitigation plans. Through the Community Soil OU, air monitoring has taken place throughout the Anaconda Smelter NPL site. Though data has indicated that local ambient air quality does not exceed Federal or State standards, visual observations of wind erosion were noted in the site, specifically within the Opportunity Ponds. As a result, dust mitigation plans were developed. In 2006, ARCO applied a dust suppressing polymer surfactant called Envirotac II, a glue-like substance, over 950 acres of exposed tailings surfaces (B-Cells, C-Cells, and the majority of the D-Cells) to help keep contaminated particulates on the ground.

RDU 8 consists of several sub-regions, including the Opportunity Ponds Waste Management Area (WMA) and Wastes Left In-Place (WLIP). Waste materials within the WMA have been stabilized in-place with either a permanent vegetative cover or a dust suppressing polymer surfactant. Though ground water beneath the tailings ponds has elevated concentrations of arsenic and cadmium, this aquifer will not be restored as such actions have been deemed impracticable. The WLIP is located within the west corner of the RDU. The area was covered with 18 inches of permanent soil to prevent human or wildlife exposure to contaminants as well as to prevent transfer of contaminates to adjacent lands/waters via wind erosion.